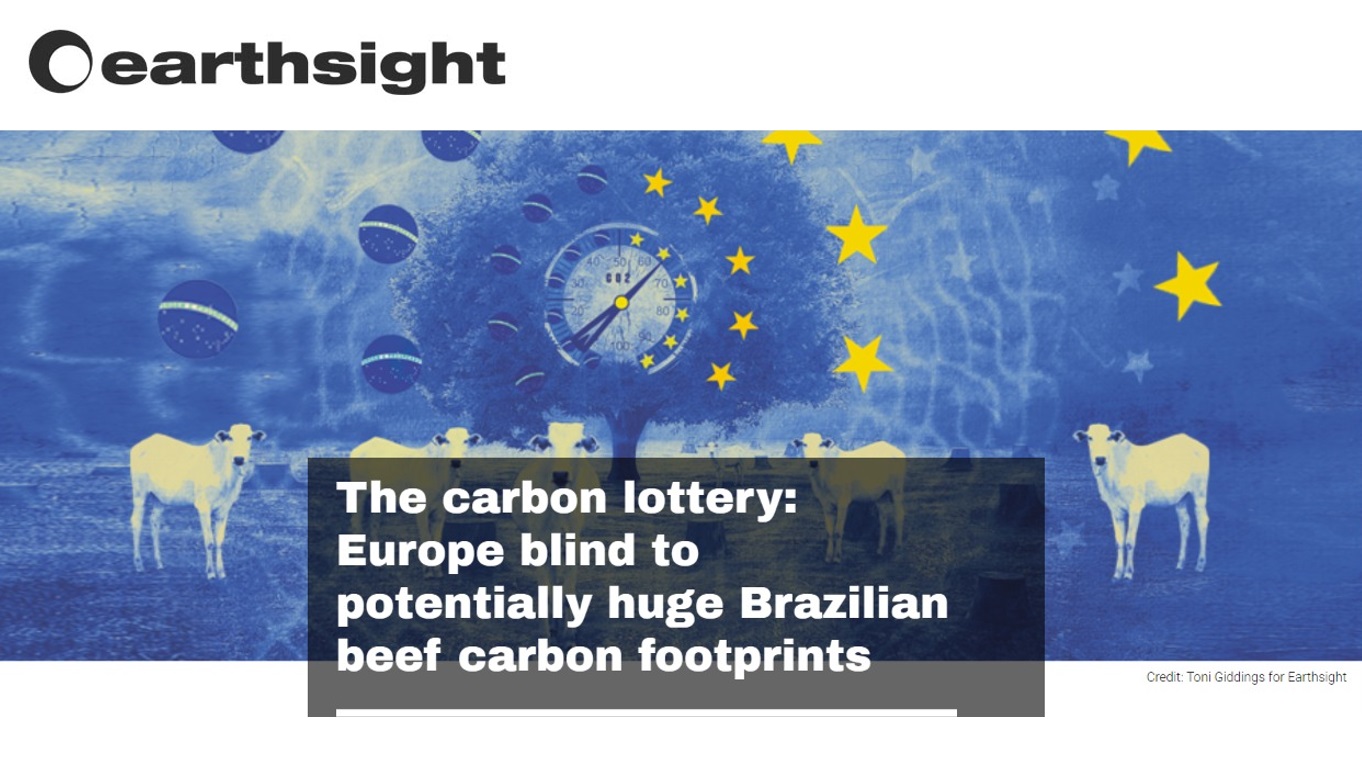 Europe’s overreliance on beef from Mato Grosso state in particular, and an absence of due diligence by both meat producers and traders, leaves Europe not only blindly complicit in Brazil’s increasing deforestation crisis but also exposed to significant levels of emissions embedded in imports.

As much as 20.8 million tonnes of Greenhouse Gasses (GHG) could have been emitted in Brazil to produce beef imported into just five European countries in 2019, equivalent to the annual climate footprint of 2.4 million EU citizens – twice the population of Brussels.

Even more conservative estimates suggest emissions could have reached as high as 2.6 to 4.9 million tonnes of CO2e (tCO2e), equivalent to the annual footprint of up to 465,000 Europeans.

The findings form part of a new Earthsight analysis, The Carbon Lottery: Estimating carbon footprints embedded in European imports of Brazilian beef, and highlight how importers must take concrete steps to source beef not linked to the highest contributing factor in the carbon intensity of beef production – deforestation.

While global GHG emissions are predicted to drop this year due to slowed economic activity following the Covid-19 pandemic, Brazil is set to contradict this trend and see a rise of between 10 and 20 per cent, mostly because of rising levels of deforestation.

Deforestation accounts for nearly half of Brazil’s total GHG emissions, with agriculture and cattle ranching, activities closely linked to forest loss, accounting for a further quarter. In 2018 cattle ranching was responsible for nearly a fifth of all emissions in Brazil – if deforestation for ranching is taken into account this share rises to 45 per cent.

Quantifying the true scale of carbon emissions tied to European imports of Brazilian beef is a major challenge. There is little evidence that producers or importers consistently verify if the beef they trade comes from cattle linked to deforestation or high-emitting, degraded pastures, while the involvement of unknown indirect suppliers remains unfettered across Brazil’s meatpacking industry.

In calculating the range of possible emissions, the research illustrates the lack of transparency in the industry and the risks importers are taking in sourcing beef from Mato Grosso and other states with high levels of deforestation.

The analysis builds on a recent study from Instituto Escolhas that calculated average emissions footprints for beef produced in each Brazilian state over a decade, including for different types of representative herd management systems and pasture qualities.

Earthsight’s analysis largely employed Instituto Escolhas’ state-level estimates across a range of herd management and pasture types, including state averages, and both degraded and stable pastures. 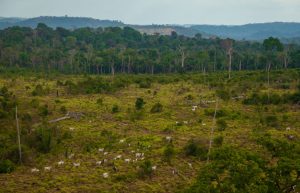 Mato Grosso was the largest single state supplier to the five countries, accounting for 33 per cent of the total.

The combined 2.6 million tCO2e higher-estimate is equivalent to the 2018 carbon emissions of 298,148 Europeans. Exports from Mato Grosso, home to swathes of Amazon and Cerrado land and the most deforested state dominating trade to Europe, alone account for 2.2 million tCO2e, or 85 per cent.

Italy’s pole position is not only due to its large import volumes but also – and crucially – its reliance on beef from Mato Grosso, which has considerably higher average emissions estimates per kilo of beef than the other four states supplying European imports.  Nearly half of all Italian imports (14,279 tonnes) come from the state.

If all beef imported into Europe was derived solely from stable pastures (low-productivity pastures with no capacity to remove carbon from the atmosphere) in each state, the total upper-average embedded emissions (when deforestation is involved) rise to 4.9 million tCO2e – nearly double that when applying state-level averages. This is the climate footprint of 465,000 Europeans.

However, if 35 per cent of beef from Mato Grosso slaughterhouses came from cattle reared on degraded pastures (high-emitting pastures due to soil degradation and which are more closely associated with recently deforested areas) and the remainder from Mato Grosso and the other four states were estimated using the state-level averages, the total carbon footprint embedded in European imports of Brazilian beef could be as high as 20.8 million tCO2e. This is equivalent to the annual climate footprint of 2.4 million EU citizens.

This dramatic increase arises because one kilo of beef produced in Mato Grosso from cattle reared in degraded pastures associated with deforestation generates a staggering 1,695kg CO2e.

As with the country level analysis, Europe’s estimated embedded emissions are dramatically concentrated in the imports of relatively few companies.

When considering estimates based on state-level averages, just two firms (Silca and JBS) account for nearly a quarter of estimated emissions, eight firms are responsible for over half, and 27 account for 80 per cent.

Some European firms have higher embedded carbon footprints than some recipient countries.

When calculated based on all imported beef originating from cattle reared on stable pastures linked to deforestation, the estimated carbon footprints of individual companies rise considerably. By this measure, JBS’s embedded carbon emissions nearly treble, taking the firm above Silca as the importer with the highest embedded footprint.

Similarly, if JBS’s Mato Grosso imports were also all derived from degraded pasture linked to deforestation, its imports into Europe would embody emissions 22 times larger (5 million tCO2e) than under a state-level upper-average across all five states.

Some of the largest importers by weight are out of the top 10 average carbon footprints ranking. The most striking examples are Marfrig (the second largest importer by weight and among the top three meatpackers in Brazil overall), Princes (UK), and Bolton Group (Italy). These firms, while major importers, can rank lower in embedded carbon emissions because almost all of their beef is sourced from São Paulo and Rio Grande do Sul slaughterhouses.

These states have significantly lower levels of deforestation – and, therefore, lower carbon emissions from forest loss – compared to Mato Grosso, and the Cerrado states of Goiás and Mato Grosso do Sul.

However, beef shipped from southern states is unlikely free from deforestation, as part of this cattle may come from states in the Cerrado or Amazon biome.

Furthermore, Princes and Bolton are large buyers of corned beef and other types of canned meat. Exporting facilities in the south likely source part of the fresh beef they transform into these highly processed products from slaughterhouses further north that are more closely linked to ranches in the Amazon or Cerrado.

In addition, while companies importing exclusively or predominantly from São Paulo and Rio Grande do Sul can appear to be exposed to lower embedded emissions, if stable pastures linked to deforestation play a major role in their supply chains their emissions can dramatically rise. This is exactly what is observed with Marfrig, Princes and Bolton.

The strong link between deforestation and the amount of carbon embedded in beef production is worrying not only because of its environmental consequences, but also because of the levels of illegality that are likely contaminating beef supply chains. A report published earlier this year by MapBiomas showed that 99 per cent of all deforestation that took place in Brazil in 2019 was illegal.

The same Brazilian firms that slaughter cattle and export beef are also some of the top importers in Europe. This could make compliance with due diligence laws easier, since these firms would already have related data, but it could also raise questions about the reliability of such systems if firms police their own practices, especially considering these companies’ histories in Brazil.

JBS, Minerva and Marfrig, the three largest exporters and among the main importers in Europe, have been linked to illegal deforestation in the Amazon and elsewhere for years and have repeatedly come under fire for their inability to monitor their indirect suppliers.

Earthsight asked the 10 companies importing the highest volumes of beef into Europe, and several others of note, to detail the findings of carbon emissions monitoring they undertake. Only Marfrig responded. The firm provided an estimated carbon footprint for its beef ranging from 48 to 99kg CO2e/kg beef. Applying these estimates against Marfrig’s 2019 imports (10,145 tonnes) reveals a range of embedded carbon footprints significantly higher than the estimates calculated for the company using Instituto Escolhas’ values.

Marfrig said it “seeks to strengthen the relationship between producers and Marfrig by encouraging the adoption of good livestock practices, which contributes to the sustainable development of the farms and ensures safer production with less environmental impact.” The firm added that it monitors the carbon footprint of its beef production based on internationally recognised methods. 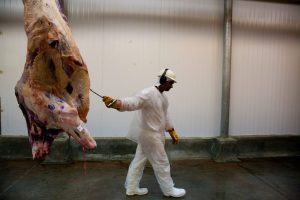 Around 25 per cent of the carbon emissions embedded in products consumed in Europe are emitted abroad. As the EU embarks on its Green New Deal and seeks to finalise the Mercosur-EU trade agreement that will dramatically increase trade with Brazil, ensuring emissions associated with European consumption are not outsourced to other countries will be critical.

To date there are no requirements on companies placing Brazilian beef (or any agricultural product from any country) on European markets to conduct due diligence into the deforestation or wider environmental impacts of those products, let alone to stop sourcing them where the impacts and risks involved are understood and deemed unacceptable.

As long as European buyers do not have appropriate due diligence systems in place they risk buying from firms linked to deforestation that generate huge climate emissions.

The EU is making positive sounds about introducing mandatory due diligence to de-link deforestation from agri-commodity consumption and moving away from the flawed voluntary corporate pledges currently in play.

Any law must be robust enough to ensure transparency and accountability in the industry.

The UK has also recently announced its intention to pass laws requiring companies to exercise due diligence on the deforestation footprint of agricultural products used and traded in the UK, including beef. However, the model proposed appears woefully inadequate as it would apply to only illegal deforestation, would not apply to all companies importing forest risk commodities used in the UK, and weakens existing initiatives and government commitments already in place.

Traceability systems and relevant land use data already exist in Brazil that could provide for comprehensive due diligence, but a mix of regulatory barriers and a lack of incentives have prevented them being used to full effect to de-link beef supply chains from environmental destruction.

No market signal – either within or outside of Brazil – currently exists to incentivise the joining up of existing traceability systems and capacities in Brazil. Until it does, it seems the carbon and deforestation lottery embedded in Europe’s imports of Brazilian beef will persist unabated.

For the full research findings see the pdf report.