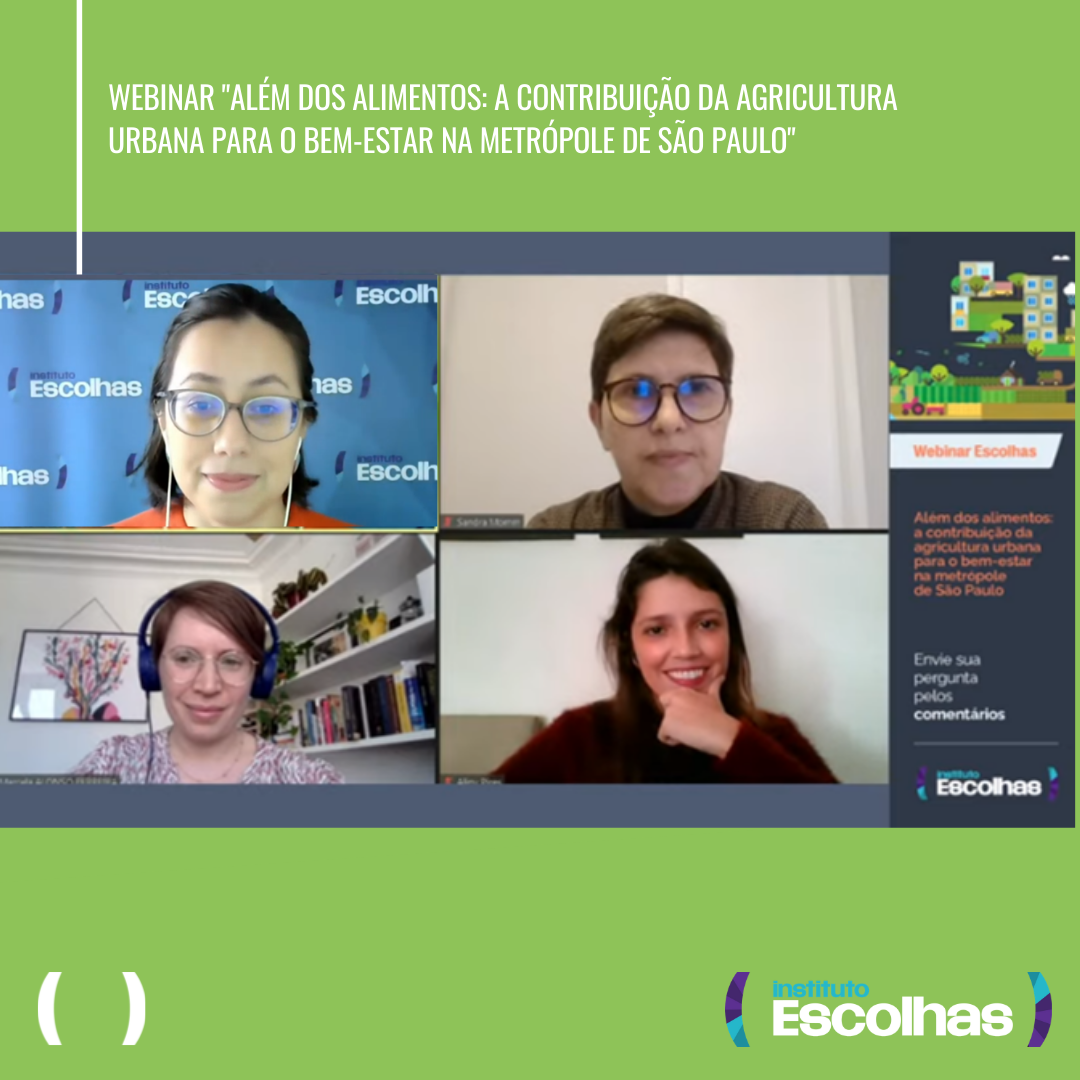 Study conducted by the Instituto Escolhas shows that from 1985 to 2019, the metropolis became 1°C warmer

On Thursday, June 10, the Instituto Escolhas launched the study “Beyond food: the contribution of urban agriculture to well-being in the metropolis of São Paulo”, showing that, in addition to feeding the population, agriculture can contribute to mitigating heat, reducing flooding and soil erosion in the metropolis, which can assist with the so-called ecosystem services.

The study is the result of a partnership between Escolhas and the United Nations Environment Programme and its initiative “The Economics of Ecosystems and Biodiversity for Agriculture and Food”, known as TEEBAgriFood, and is a continuation of the study “Closer than you think: the challenges of food production in the metropolis of São Paulo”, launched in late 2020 in partnership with the URBEM.

After the release of the data, a debate was held on the topic, featuring three researchers who are experts in urban spaces, urban planning, ecosystem services, environmental impacts and climate change in cities and urban agriculture: Aliny Pires (Professor at the State University of Rio de Janeiro and coordinator of the Brazilian Platform for Biodiversity and Ecosystem Services); Marcela Ferreira (Associate Researcher at the Institute of Urbanism and Studies for the Metropolis – URBEM) and Sandra Momm (professor at the Federal University of ABC and coordinator of the Global SPRING Network). The debate was mediated by Jaqueline Ferreira, Escolhas’ Projects and Products Manager.

Get to know the results

The first model shows what happened to ecosystem services between 1985 and 2019, a period when the urbanized area increased by 57,000 hectares. The second, called BAU (Business As Usual), shows what would happen between now and 2030 if the urban expansion rate in the metropolis maintained its current trend, and the last, called Scenario 1, simulates the sustainable expansion of food production in areas currently experiencing high social vulnerability and low fresh food supply, which could supply 13 million people with vegetables.

All these scenarios are available interactively in the online summary, available on Escolhas official website (alemdosalimentos.escolhas.org), as well as information on the five ecosystem services analyzed, an analysis of the losses and gains for ecosystem services across all municipalities of the São Paulo metropolitan region (SPMR) between 1985 and 2019, and the study’s open data.

Overall, in the comparison of BAU with Scenario 1, the study showed that agriculture could improve the negative impact of urban expansion in the SPMR. For example, on the issue of heat mitigation, the simulation results showed that between 1985 and 2019, the average temperature of the São Paulo metropolitan region increased by 1°C. If forest and food production areas continue to lose space to urban areas, the tendency is for the temperature to rise another 0.6° by 2030.

On the other hand, the maintenance of forests and the expansion of sustainable agricultural production areas could help slow down the temperature increase phenomenon, reducing it by 0.2°C in relation to 2019, since it is the green areas that ensure the maintenance of temperature by cooling the environment and absorbing heat. However, as Jaqueline Ferreira explains, this effect will only happen if the agriculture developed is sustainable, with practices such as ecological soil management, keeping trees in the productive system, not using agrochemicals, and more efficient irrigation techniques.

At the debate launch, the impact of the unsustainable use of land and natural resources in the metropolis on the wellbeing of its residents were discussed, as well as possible solutions in this context.

Jacqueline Ferreira opened the conversation by citing that the growth of the urbanized area significantly impacts residents in ways such as the reduction of available drinking water and the increased frequency of flooding. Ferreira then passed the floor to the speakers, who took turns asking specific questions. Watch the event in full here.

The unfair competition for land use between urban agriculture and the real estate market was one of the most highlighted topics, since the price of land in cities is much higher than the price of land that a farmer can afford, making it a challenge to have profitable agricultural production in cities.

The water issue was another subject of much debate. Citing the drought that the country is once again facing, researchers concluded that little has been learned from the lessons of the past.

“Among all the ecosystem services, water is the one that people miss the most because it is a fundamental component for our well-being. We can talk about the different aspects of the water issue, such as quality, quantity and regularity of the flow. But we must keep in mind where the water comes from and have this asset available”, researchers argued, calling attention to the importance of protected areas for water production and rainfall regulation.

For Sandra Momm, after the crisis, even though investments in infrastructure were made, little was done to mitigate the causes or to ensure green structures in the basins that were capable of producing water. “In addition, all this deforestation in the Amazon region certainly doesn’t help to face the problem”.

The researchers also pointed out that the urbanization process will become increasingly important as a vector for land use, loss of biodiversity and loss of ecosystem services. Therefore, public policies must accompany this change, incorporating measures to promote ecosystem services, but also implementing what already exists.

“Brazil already has a very good public policy framework. It is so good that people want to dismantle it. So, the first solution would be to look at what we already have and then try to make progressive instruments viable, according to the reality of each municipality. Urban agriculture forms part of these innovation packages because it includes green urban infrastructure, making the nexus between water, energy and food,” explained Momm.

Another possibility highlighted was to expand incentives for programs involving the Payment for Environmental Services – which have been used to value the contribution of sustainable agriculture to the provision of ecosystem services – to include cities and as a way of promoting urban and periurban agriculture. For Aliny Pires, this is a possible solution, but it is contingent on an important question: “who is going to pay for these services?” and it would involve a collective paradigm shift for the public and private sectors.

Marcela Ferreira adds that there is a lot of room for transformation if we look at the environment in a different way, which can help to find solutions to these many challenges: “There are many free areas in the cities. Why can’t we use these areas for agriculture, taking advantage of the waste that is already generated for composting?”.

The study “Beyond food: the contribution of urban agriculture to well-being in the metropolis of São Paulo” is available at alemdosalimentos.escolhas.org