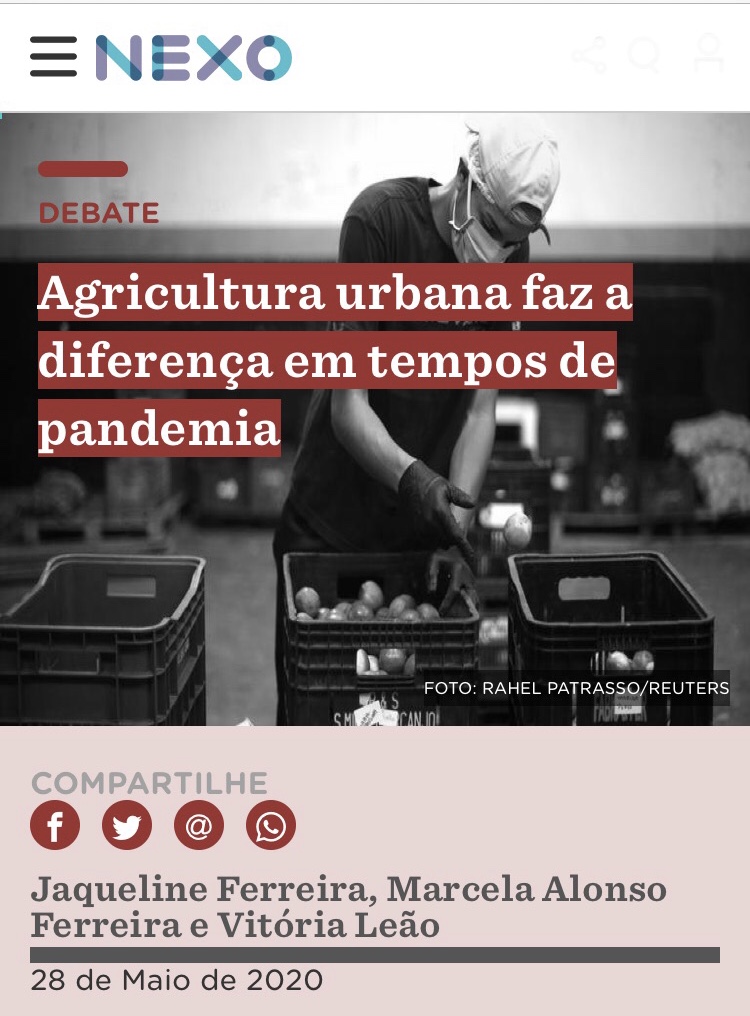 “Quarantine invites us to rethink our food consumption, where what we eat comes from, how it is produced, and how we access it.”, article “Urban agriculture makes the difference at pandemic time” informs, which is published by Nexo Jornal.

The theme of urban agriculture and its contribution to the environmental, social, and economic sustainability of food system of São Paulo Metropolitan region in in a research work, and the study will be released in the next few months. The work, designed by Instituto Escolhas, has been prepared in partnership with Instituto de Urbanismo e Estudos para a Metrópole (Urbem) (Institute of Urbanism and Studies for the Metropolis)

Read the entirety of the article below.

Upon the new coronavirus crisis, the short circuits of trading have showed its importance in guaranteeing the farmers’ income, and in supplying food to the cities

The changes in food sector as a result of the impacts of social withdrawal measures required to contain the pandemic of the new coronavirus have been a recurring subject in last few days. If, at the start of the quarantine, the central neighborhoods of the cities watched the running to the supermarkets with lines and emptied shelves, on the other side, the challenge in the outskirts has been to guarantee the maintenance of the daily meals. In a way or another, the quarantine invites us to rethink our food consumption, where what we eat comes from, how it is produced, and how we access it.

Instituto Escolha and Urbem develop a study about the agriculture in São Paulo Metropolitan Region. According to an analysis of the research still under development, 13% of the busy occupation works in activities directly related to food, and, in average, 39% of the expenditure with food of São Paulo inhabitants is made with meals outside home. Upon the current context, even if the delivery systems are intensely operating, the food habits had to be changed, forcing São Paulo inhabitants to eat at home.

In such complex scenario, an essential link of the food chain, the farmers, many times invisible or unknown by the majority of the consumers, also live changes caused by the coronavirus pandemic. The impact to those who produce food is associated to several factors, but the forms of production distribution, that is, the access ways between the producer and consumer, have special weight to who depends on the production in the countryside. With the closing of restaurants, the drop in searching for fresh and perishable products, the reduction of the public purchases and the reduction of the street markets, many producers that distribute their production to São Paulo have been faced adverse situations such as the waste of food resulting of the drop in sales.

On the other hand, to the urban farmers, who access the so-called short circuits of trading, the scenario is different: the demand for their products has intensified. Characterized by the proximity between the consumer and producer, reducing at the maximum the number of intermediaries in the food market — such as the organic products and the producers’ fairs, the groups of responsible consumption, and some modalities of public purchases —, the short circuits (re)value the local production and the relationships of solidarity.

THE SOCIETY AND THE PUBLIC AUTHORITY ARE LIABLE TO RECOGNIZE THE AGRICULTURE EXISTING IN GREAT SÃO PAULO, ITS LINKS WITH THE CONSUMPTION, AND THE ROLE IN THE RESILIENCE OF THE FOOD SYSTEM OF THE LARGEST METROPOLIES OF LATIN AMERICA

Mrs. Terezinha Matos, inhabitant and farmer of the neighborhood of São Mateus, Eastern region of São Paulo capital, comments that the demand for her products grew by 30% since the notification of the pandemics in the state. Member of AAZL (Associação dos Agricultores da Zona Leste – Association of the Farmers of Eastern Zone), Terezinha plants more than 50 types of organic products, among greeneries, vegetables, and some fruits under the power lines in the Eastern region of São Paulo outskirts. But she is not alone: who ranges the city of São Paulo and its huge territory may get amused with the production of food within the boundaries of the city. According to data of Censo Agropecuário de 2017 (2017 Farming Census) analyzed by the study, there are 550 farming establishments in the city, being around 250 of them located within the urban zone of the city.

With the closing of Sesc system, where Terezinha took part in monthly events, and the reduction of the public of the organic products fairs, the alternative was to offer baskets of food to the clients of the surrounding neighborhoods in the same region, who personally look for her. The family farmer believes that the growth in the demand for organic products is also an effect of a greater concern with the quality of food due to Covid-19, and she also comments that the offer of products of the entire association has not been able to fully respond to the large search.

Instituto Feira Livre, located São Paulo downtown, also saw the demand for its products to significantly increase. The association trades fresh organic products directly from family producers next to the capital, and other grocery items from farther regions, all at the producer’s price. To defray its operations, it suggests an additional contribution from the consumers. Operating in a short circuit of trading, the Institute had a growth of 30% in last March, comparing to the previous year, despite the operation restricted by the pandemic. The members attribute the increase of the demand in the Institute to the closing of the restaurants and some markets, which led people to have meals at home, to look for the few places opened, and to keep themselves supplied.

In such pandemic, the short circuits of trading have showed their importance in guaranteeing the farmers’ income, and in supplying food to the cities, in situations where the supply goes through impacts. If, on one side, the usual centralized model provides logistic scale gains, on the other side, it shows to be more vulnerable to crises. The society and the public authority is liable to, more than ever, recognize the agriculture existing in Great São Paulo, its links with the consumption, and its role in the resilience of the food system of the largest metropolis of Latin America.

Vitória Leão is master in applied ecology, researcher in the Group of Studies in Urban Agriculture of IEA-USP and at Instituto Escolhas.

Marcela Alonso Ferreira is a town planner and master in public policies, researcher at Urbem and Instituto Escolhas.

Jaqueline Ferreira is PhD in social sciences and project manager of Instituto Escolhas.

Link to the original publication on Nexo Jornal: https://www.nexojornal.com.br/ensaio/debate/2020/Agricultura-urbana-faz-a-diferen%C3%A7a-em-tempos-de-pandemia