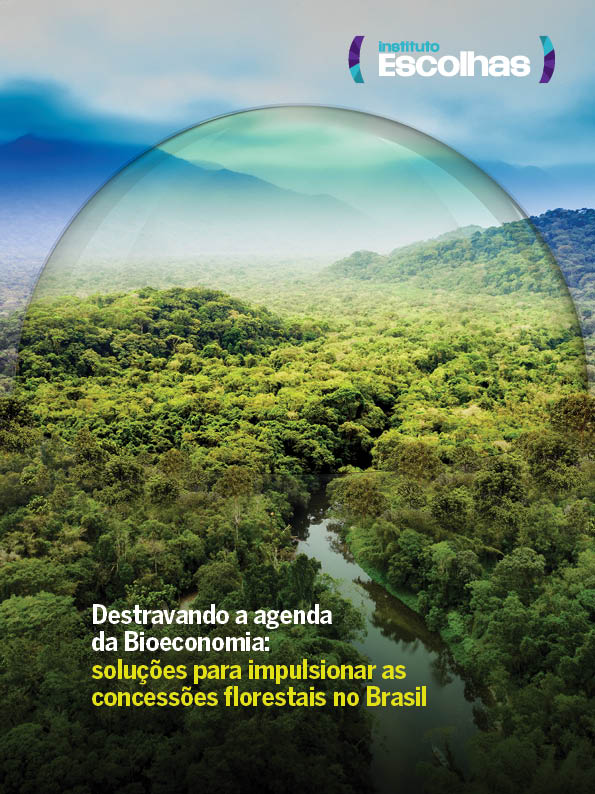 The proposals designed and executed by Instituto Escolhas, in partnership with the Brazilian Coalition on Climate, Forests and Agriculture, serve as a basis for the new bill presented to Congress

Deforestation associated with the illegal sale of timber is not a new issue, but one that has recently returned to the center of public debate after President Jair Bolsonaro raised it at the last BRICS Summit on November 17th.

Currently, it is estimated that between 60% and 70% of all timber produced in the country is of illegal origin, with most of it earmarked for domestic consumption¹. To combat this problem, experts have focused on strengthening forest concessions, a public policy initiative enabling private enterprise to manage and exploit government forest areas through the legal supply of timber and other services derived from sustainable management. In addition to enabling the proper use of public forests, involving legal activities that are regulated and monitored by public agencies, the initiative also promotes the value of keeping forests standing, building awareness on the benefits for local economies and the significant contributions to the country’s climate change mitigation goals².

Released on Wednesday, December 2nd, the study “Unlocking the bioeconomy policy agenda: solutions for boosting forest concessions in Brazil” listed a series of measures needed to improve the Public Forest Management Law (LGFB)³ in order to ensure greater agility in the concession process, flexibility and economic attractiveness for locking in contracts and encouraging new forms of sustainable exploitation of Brazilian forests. These include bioprospecting (use of local biodiversity ingredients for research or marketing) and the provision of environmental services (such as carbon retention, regulating rainfall cycles and biodiversity conservation).

The proposals were discussed in the context of the Brazilian Coalition on Climate, Forests and Agriculture, resulting in a policy paper presented in October 2020 to the following members of the Agriculture and Livestock Parliamentary Caucus (FPA), the Environmentalist Parliamentary Front, the Joint Parliamentary Front for Regional Sustainable Development and the Parliamentary Front in Support of Ecotourism (ECOFPRAR): Alessandro Molon (PSB/RJ), Aline Gurgel (Republicanos/AP), Arnaldo Jardim (Cidadania/SP), Átila Lins (PP/AM), Bosco Saraiva (Solidarity/AM), Enrico Misasi (PV/SP), Sidney Leite (PSD/AM), Rodrigo Agostinho (PSB/SP), Zé Silva (Solidarity/MG) and Zé Vitor (PP/MG). This document informed the elaboration of a draft law written and protocolled by Congressman Rodrigo Agostinho (PSB/SP) on Friday, November 27th. See below for some of the most relevant changes contained in the text.

According to Teresa Rossi, project coordinator for Instituto Escolhas who headed up the aforementioned study, “the proposals presented aim to encourage the establishment of new forest concessions in the country, as well as to expand the areas dedicated to the sustainable management of the Amazon, ensuring greater effectiveness for a mechanism that, although promising, clearly did not take off as planned.”

Data from the first Annual Forest Grant Plan (PAOF), published in 2007 by the Brazilian Forest Service (SFB) and cited in the study, indicates that 43.7 million hectares are eligible for concession. However, the PPAOF 2021 states that federal forest concessions currently total only 1.050 million hectares and attests that, since 2016, only one new contract has been signed.

Part of the proposals contained in the study address issues that have arisen over the last nearly 15 years of implementing the law, such as fast-tracking the bidding process and further facilitating flexibility in contracts; while another part aims to prepare forest concessions to become future bioeconomy hubs, providing innovative bioproducts and environmental services.

“A legal framework that enables trade in carbon credits and encourages the consolidation of payment models for the other environmental services that forests can offer, such as biodiversity conservation and regulation of rain cycles, may attract national and international resources for financing climate change mitigation projects designed to achieve the goals of the Paris Agreement and the 2030 Agenda,” says Rossi.

The Escolhas initiative sought to reinforce that forest concessions should be a relevant component in shaping the agenda to transform the socio-economic development model most commonly employed in the Amazon, enabling coexistence with other productive arrangements that keep the forest standing and stimulate the sustainable growth of the regional economy.

“The creation of a new legal framework for forest concessions has the potential to boost the transition to a low-carbon economy in the region and contribute to reducing deforestation,” Teresa Rossi adds.

¹ Podcast “The Subject” interviews Beto Veríssimo, agronomist and co-founder of Imazon (Institute of Man and the Environment of the Amazon), by Renata Lo Prete on 19/11/2020. Available at: https://is.gd/Le48Ky. (in Portuguese)