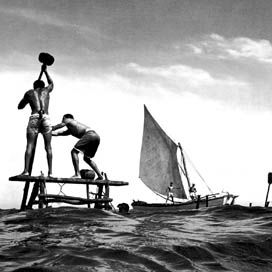 Roberto Linsker graduated in Geology at the São Paulo University Geosciences Institute. Beginning in 1998, he started to photograph for the Folha de São Paulo, Folha da Tarde, National Geographic Brazil, Bravo, Marie Claire, and Vogue. In 1994, he founded the Terra Virgem Publishing House and created the collections Brazil Adventure, Caring for Life, Times of Brazil, and Traveling Photographers. During ten years he was dedicated to the project Sea of Men, a photo documentary of artisanal fishing on the Brazilian coast (2006). He received the SENAC Award for Environmental Journalism (1996), the 2002 National Geographic Magazine Pictures of the Year Award, and the 31st Abril Journalism Award (2006).